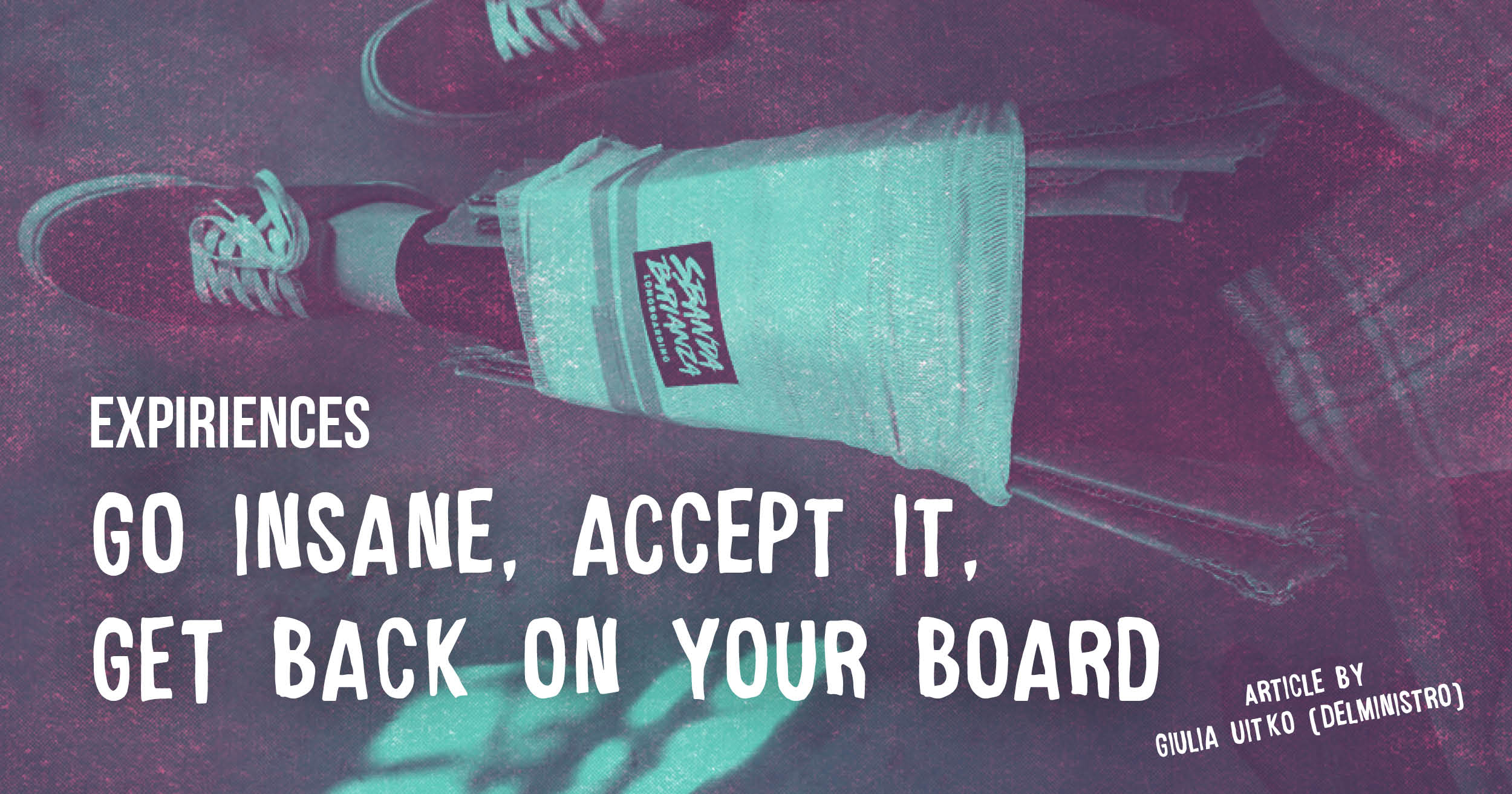 We all know injuries might be part of the game, but not the hardest part though; accept that our body needs time to get well again and the time in which you won’t be able to skate won’t never go back to you, accept that all the plans you made for the whole year might be destroyed in few seconds, accept that a part of you will be taken for a while and you won’t feel complete until you’ll be back on riding, that’s actually the hardest part of the game!

I’m here right in front of my computer scrolling pictures and watching videos of me and my mates riding,

The injury I’ve been through is not that bad or serious I can’t even image what could be if something worse happened to me! Here is my story:

Last year I spent the whole winter working hard to save money to be able to travel a lot around Europe during spring summertime, I made a lot of plans, I paid and signed up for few races and freerides all around, I did train a lot with my mates anytime we had free time, even if it was night time, I loved that part, training with others and improve together, that’s the coolest!

Anyways in the middle of April I went to this race and freeride event in North Italy, I was wearing my leather suit for the first time, I had a run with one of my best skate friend ever and I got hurt, I made a mess with my knee, that left knee I love so much (I’m regular) wasn’t that strong at the time because few years before I got hurt snowboarding.

It just twisted while I was sliding and I fell really bad and broke ligaments and the meniscus; nothing that serious or painful but I wasn’t able to skate anymore because it was so unstable.

After few days I did privately the MRI to check the situation (the waiting list to do it with the sanitary system it was too long, so I just paid to do it sooner) on the end of May I finally had the appointment with the physiatrist, he asked me if I wasn’t too old to skate (I’m 26yrs) and why a girl should skate and have scars all over her body.

He explained me I had to rebuild my ligaments and clean up the meniscus, so he put me on the waiting list for the surgery and he told me that they would probably call me back on September to do it.

I was so mad I had to waste so many months waiting for the surgery, besides my season was over and there was nothing I could do about it… it was awful.

Months passed, I worked on myself to accept the situation and even though I wasn’t able to skate I decided to go to few events to stay with my mates, meet new people, be helpful for the organizers and feel all the good vibes that the longboard world spreads around.

The end of September arrived and since nobody from the hospital called me I decide to do it and ask them what was going on and when I was supposed to get the surgery… They told me that I wasn’t on the list anymore but they didn’t knew why, it would probably be an error from the computer and they told me there was nothing they could do about it and if I wanted to do the surgery I had to make another appointment with the physiatrist and wait few more months.

Could you even imagine how awful it feels after being waiting for so long? The way they treat you, they don’t even listen to you, they just want to end up the call as soon as they can.

The ambulance there didn’t wanted to give me a knee brace because they said that they just had one and they were afraid I wouldn’t give it back before going home… They just blocked my leg folding an empty paper box and fixing it with some bands!

Fortunately an old local grandpa passed by while I was there and he gave me his handmade stick that he use to walk and he told me that I would need it more than he does, it was just so sweet and it helped me a lot, I couldn’t walk without it, I still have it there next to my boards, it reminds me of the kindness.

I was so mad at the time I just went to the hospital to talk in person to them, I went to the surgery’s desk, I sat down and I told them: „I won’t stand up until you will put me on that damned list again“, because that was their mistake and it wasn’t fair I had to pay for it! After few minutes arguing they finally did it.

I got the surgery the 2nd of November, after being waiting for almost 7 months. Fortunately, that time all the doctors were nice to me and I spent two days at the hospital in a room with a 12yrs old skater with blue hair that was sharing with me all his chocolates and candies, he was so cute!

Before leaving the doctors told me to look for another hospital where to do the rehab because they didn’t have a free place for me there, I was supposed to start it after 10 days from the surgery but guess what, I did not.

I called different hospitals but the waiting list were too long everywhere and I couldn’t afford to do it privately, because it costs too much!

So I just trained home myself doing exercises and also using the balance board my sponsor gave me, but it wasn’t easy at all to do it myself because at the time

my knee was hurting a lot; I found the strength to do it focusing on the riding memories.

After few months I found a free place in a hospital, but the doctors there told me my knee already looked better and it was useless to start the rehab that late.

Now you would probably think that’s a joke and I just made it all up but I swear is not! That’s how it works in Italy most of the time even though the sanitary system is supposed to be a public service and we pay taxes to have it.

Anyways now is almost March and my knee is getting stronger and stronger, have no idea if I really did a good job on it and how it’ll be when I’ll get back on my board.

Some days I feel down and it’s even hard to imagine myself riding again, but fortunately I’ve got a lot of skater-friends out there that are waiting for me and they always motivate me a lot, those skater friends who are always by your side even when you are not able to ride are a special gift, I look forward to go shred with them down a hill or on the seaside soon.

Nobody will give me back the riding time I lost during those months and there is nothing I can do about it, but what I certainly know now is that I won’t give up, I’ve done all this to be able to skate again and I will do it for sure!

A lot of things changed in my life since I got injured, all I can say now, after almost a year without riding missing a big part of myself is

That’s my goal, that’s my message for everybody out there, that’s a lesson I’ve learned and it’s even tattooed on my skin.

I wish you all a rad, happy ride!

Since she was a kid Giulia was always inspired by board sports and exploring places. she always wanted to be the indipendent so she started working when she was 15 just to have the opportunity to save money and go travel all around, she also left her parent’s place when she was 17. She started snowboarding when she was 11 then she moved to surf and skateboarding; 5 years ago she saw guys doing downhill and she could’t resist to try it! that feeling of zero gravity underneath your feet is what she loves the most. She took part in few project such as „70mm_longboard trip“ which is distribuited by XtremeVideo and also „longboard revolution“ that you can find on vimeo. She’s not competitive and she doesn’t likes races, she’s more about freeriding and surf waves with friends, after few injuries this winter she will finally go snowboarding again.

Bushings   Reptide, I use to change them